I think blogging is a thing that must be practiced.

I am out of practice.
I have no idea what to do with this here, with ... this.
So I think I'm going to stop deleting things I think and type and just...
Just go?
I'm wearing a bird earring.  It's cool.
I give my Saturdays to my cello, and I don't regret it at all.  I love it.  I need more practice, but I love it.
Spending so much time with my cello makes me think of things I sometimes wish I could do better.
Like blog.
And stay in touch.
And put things in their proper places.
And own a bicycle. 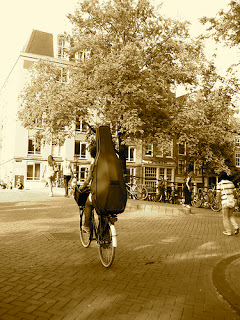 Know what I miss?  Film.  I did a semester of photo in high school.  I had black and white film and a single lens reflex camera.  It went places with me, in much the same way my moleskin does now. (I know the brand is Moleskine.)
It was really relaxing for me to hang out in the darkroom.  Especially at the end of the year, when all the assignments were done, and I had a bunch of leftover photo paper and old negatives, and more experience and stuff.  And it was quiet in there.
I like the quiet.
And I don't much mind being alone.
Nor do I mind people.  I can't, with a family as large and as loud as my own.
I love my family.
I'm exhausted.
How are you, how have you been?  Really.  I'd love to hear the answer(s) to that question.
PS: I heard the goundhog predicted an early spring.  Today felt like spring.  I loved it.
at 8:19 PM 1 comment:

Sometimes big things happen, and it means you have to make adjustments, or accept the way things turned out.

... So what?
I was walking to the HFAC, I pulled out my phone, I pushed some numbers, said some words, did the basic phone-call thing.  No big deal.  Sure, that phone-call was important enough to change the course of my life, but life goes on.  Sure, all the signs that were pointing me in the direction of be-a-successful-human-being were all plucked out of the ground, thrown into a mixing bowl, and then rearranged, altered, replaced, or just thrown out, but why should that be anything big?
I changed my major.  Over the phone.  I'm not an English major anymore, I'm a Theatre Arts Studies major, but the department calls me Pre-Theatre Ed.  This is something that's really important to me.  Shouldn't it feel big?  If things happen that change your future, it's big!
...Isn't it?
When the girl on the phone said, "Okay, just to confirm, the English major will be DELETED!!!!!!, right?" I did feel a small tug of something like nostalgia, kinda like English major heard the conversation I was having and said from the background, "oh dang, I thought we were gonna do stuff later," but then it went back to doing whatever it had been doing before, and didn't bring it up again.
That was all.  It was small.  And I replied to the girl, "yeah, sure, go ahead."
It was important! And it wasn't even the only important thing that happened today;  I could go into big detail about the important things that happened today, but I'm not gonna.  Partially because I want to be done talking so much, and partially because I want to go to sleep, but probably mostly because I don't really think it's that big of a deal.
I don't want to talk about those things.  It doesn't interest me, I guess.
Yeah, today some things happened.
But they were just ... things.
Important?
Undeniably.
Big?
... Well I don't think so.
All done?
Sure.
at 10:28 PM 2 comments:


Did you know that?  I sure did.  It's even officially winter, according to the spot where Earth's hanging out in space, and not just in terms of weather.


My blog still looks like I was procrastinating homework back in November.  I'm hoping to completely change it.  Fix it.  Clean it.


I think the major motivation to do something I'd been idly thinking of for MONTHS was a recent email. (Another story, for a post I hope will materialize soon...)
... I'm so bad at email.  It's something I should really work on, especially because sometimes a grade can depend on an email.  They can be important.  I really need to get better at that.


And I really want to get better at consistently blogging.  The only reason I've kept this blog going for so long is because I tend to write...


Christmas Day is over.  (That's another hope-to-post...)


I hope everyone has been wonderful!  I really need to just go to sleep, and stop blogging.

When it's zero and one eighty;
When it's midnight and noon;
When it's black and white,
Then it's a pair of exact opposites.

When it's day or night,
Or hot or cold,
Or awake or asleep,
Then it's general exact opposites.

It doesn't make sense, but stay with me.

When it's going, not stopped;
When it's silent, not loud;
When it's hectic, not calm,
It's doing the exact opposite.

But it certainly won't be found on the list of shoulds.


However,
I'll do it anyway.  Because it makes me feel productive.
Which helps me actually be productive.

has it really been so long?


I keep promising myself I'll finish homework in a decent time-frame, too.


I'll keep those promises, Self.  Just keep being patient.

ones who clicked the button

what i write about